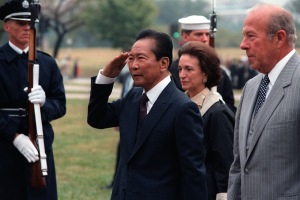 Calls of “OUST PNOY” and “PNOY RESIGN” reverberate in the streets as the Philippines is embroiled in another struggle for power. While the President fumbles his way out of the mess of the previous two months, a motley group calls for his resignation: agitators from the old and the new elite, from the church to secular figures, and from the left. Aside from a shared purpose, the group as a whole believes in little else except for the belief that a change in leadership will somehow usher in a transformation for the better  – whatever “better” means for the group they represent.  It is as if the wresting of power from the “wrong” hands guarantees that the “right” hands can improve the situation pronto. To be sure, having the “right” hands turning the levers of power is a necessary condition for the betterment of any society; however,it is never sufficient. There are other factors to be considered, one of which are institutions (e.g. formal rules, norms, mores). In this article, I focus particularly on government bureaucracy.

Part of the American colonial project in the last century was to prepare the Philippines for self-rule in the name of “Benevolent Assimilation. In response to what the Americans perceived as the over-centralization of power in the country during Spanish rule, the Americans created a devolved government for the country which tied the development of the Philippine state firmly within the grasps of the local elite (for a detailed discussion, see Hutchcroft). Thus, the development of the political and administrative components of the state were subject to patron-client relationships.  The development of the means through which government acts has been heavily influenced by the padrino system serving the perpetuation of whomever holds power. Even until today, structures of control beyond the stipulation of formal structures exist in the Philippines that undermine the functioning of the Constitution. The state does not have the only means of violence because the private armies of the local elites challenge the government’s own. Patron-client relationships are exacerbated when politicians buy and voters sell their right of suffrage. What is more worrisome is when these structures of control use the formal structures to maintain itself. Networked Governance comes to mind.

Even with tremendous political will, the absence of conditions of possibility will not allow a policy to be effective. In other words, power in the right hands is a necessary but insufficient driver of development.

This begs the question: does everything boil down to power?  Would an ideal leader or group taking power remedy the ills of Philippine society?  Perhaps,  yes, since the bureaucracy responds to whomever is in power. But I would like to point out two limitations to such a limited purview. First,  when the ideal is replaced,  the reforms it has initiated goes with the ideal. A totally dependent administrative system would succumb or tolerate whatever ills the new leader or group introduces. The systems of justice will not work. Transparency initiatives will cease. Corruption ensues.  Second,  because the bureaucracy is the means through which the state administers its will,  even while the ideal is in power capacity problems would still be there.  This can be glimpsed at the Philippine Development Plans of the current administration.  The high mark that it set for the administration to achieve is marked by unmet objectives. Some are un-operationalized –  barring action –  while some are over the institutional capacities of departments that are assigned to –  making its implementation inefficient and ineffective.  Even with tremendous political will, the absence of conditions of possibility will not allow a policy to be effective. In other words, power in the right hands is a necessary but insufficient driver of development.

The intent here is not to discount the importance of winning or seizing political power to effect social change.  Instead this is a plea to consider that there’s a whole gamut of social realities that needs to be considered for any grand scale social projects.

The Constitution – or at least the rule of law – needs to be woven in the collective consciousness of the nation.  When this happens,  we will be one step closer to the maturation of our institutions.

I would like to raise the Constitution as a final illustration for the point I am making.  The Constitution is the most basic law of the land. Yet,  its stipulations are treated as options instead of mandates.  The Anti-Political Dynasty Law that has been commanded by the Constitution is yet to surface;  the anti-nuclear proliferation declarations are violated by the Visiting Forces Agreement and –  almost every time –  extra-constitutional solutions are proposed for dealing with erring officials.  The Constitution is an institution that is supposed to hold the state in checks and balances, guarantee rights, and mandate the general welfare of the people.  The Constitution – or at the very least the rule of law – needs to be woven in the collective consciousness of the nation.  When this happens,  we will be one step closer to the maturation of our institutions.

Yvan Ysmael Yonaha is a Development Practitioner, Technology Enthusiast and Productivity Buff. Yvan holds an AB Degree in Sociology from UP Diliman and is in graduate school for Philippine Development Studies. He is a former Instructor in the Department of Social Science for the Pamantasan ng Lungsod ng Marikina, and currently works for Ateneo de Manila University as a formator of the Office of Social Concern and Involvement.