Editor’s Note: On weekends we bring you #TDOPicks – our picks for the best social science features we’ve found on the Internet this week. We feature a variety of content aimed at both the layman and the social science professional. Tell us what you’re reading or watching by tweeting @theDailyOpium with #TDOPicks or posting links on our Facebook page

Art in the Age of Fatalism, by Sam Gindin

What is art’s role in a society where even the possibility of revolutionary change is denied, and all overtly political forms of expression are shunned – in more or less subtle ways? Former union organiser and college professor Sam Gindin insists there is still hope for a renewal and rechanneling of art toward radical causes.

“If art is to engage the world as an active force, it needs to be both grounded in the world of everyday life and go beyond it.” 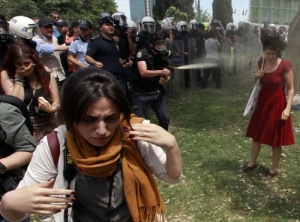 Reflections on 2013: from Thatcher to Taksim, by Roar Collective

A selection of Roar Magazine’s best essays from a(nother) year of Protest.

“This was the year Margaret Thatcher died — yet her zombie ideology lives on. It was the year Hugo Chávez passed on as well, but the grassroots revolution of ordinary Venezuelans continues unabated. This was also the year Nelson Mandela moved on, but the social struggle against economic apartheid remains in full swing. Most of all, however, this was the year that the indomitable spirit of resistance resurfaced around the globe — and still no one really seems capable of jamming the genie back into its bottle just yet.”

Can you be too religious?, by Giles Fraser

Giles Fraser spells out the difference between religiosity – and faith.

“Worshipping a book and worshipping God are two totally different things. Falling down before a baby, with all the inversion of power that this implies, takes courage not intellectual suicide. It is about the world being turned upside-down, the mighty (including the religious mighty) being cast down and the weak being held up. It is about placing something other than oneself at the centre of the world. And no, I don’t think there can be too much of this.”

What the Rest Really Should Learn From the West, by Pankaj Mishra

In a review of Deepak Nayyar’s “Catch-up: Developing Countries in the World Economy”, Pankaj Mishra points to the hypocrisy of Western nations whose own economies never depended on the restrictive model of market liberalism they have sought to impose on developing states.

“Nayyar unearths an unflattering history of free trade that “locked developing countries into an international division of labour which was not conducive to industrialization or economic growth.”

With no structural change possible in their economies and their sovereignty compromised by Western powers, the “Rest” became dependent on industrializing countries “not simply for markets and finance but also as their engines of growth.”