Food remains a crucial window to any culture. A survey of taste and preparation reveals to us a culture’s worldview, attitudes, and even conflict resolution patterns. In addition, a cuisine’s favored ingredients reveals a lot about the ecological  and economic roots of its unique flavors.

Food therefore is a very potent tool to understand and define the “Filipino” in Filipino culture–a long contested notion of identity that is often left not nuanced and yet displays a certain pride. Discovering where this bravado comes from is of course as intriguing as defining our national identity.

When the Spaniards sold these seven thousand islands to America, “the Philippines” was born. It was a nation-state on paper with a territory defined not by a consensus of its inhabitants but by a political transaction between colonizers. While today the term “Filipino” pertains to the notional culture of the territory that is the Philippines, we continue to search for that which binds us in the absence of a historic unity.

This is where food comes in. Indeed, amongst the various regional cuisines served across the archipelago, perhaps we can find aspects that bind us, that we can truly call Filipino.

A Degustation at Café Ysabel

It has been a year and a half since I partook of an iconic degustation at Café Ysabel for one of my classes, prepared by no other than Chef Gene Gonzales. In a degustation, participants sample a menu by analysing and appreciating the taste and the preparation of the food.

That night, this restaurant for fine Filipino food was turned into a laboratory of culture as we journeyed through seven courses. In these courses, Filipino food were matched against their international counterparts, opening a cross-cultural dialogue and a space to reflect on our identity through food, taste, and ingredients.

The complete gastronomic exercise, culling recipes from throughout the Philippines and around the world, featured the following dishes: 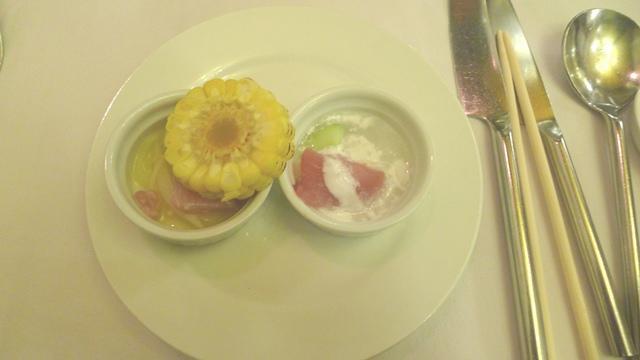 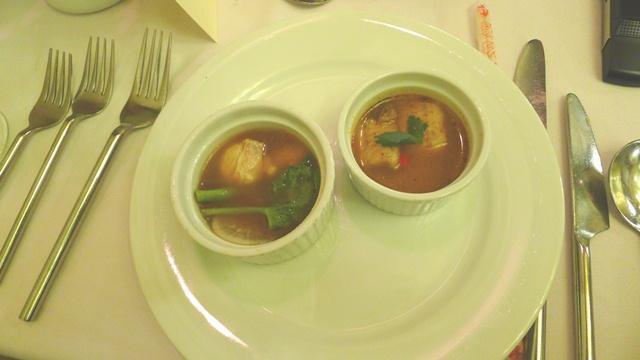 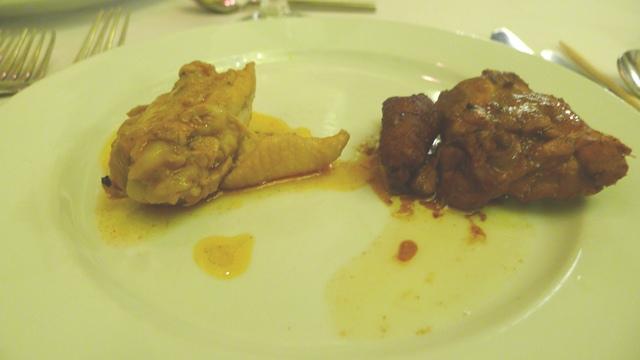 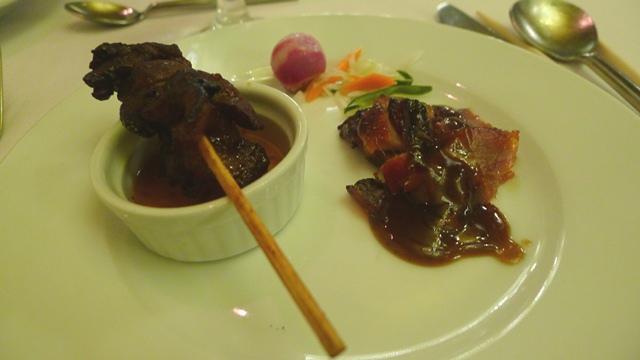 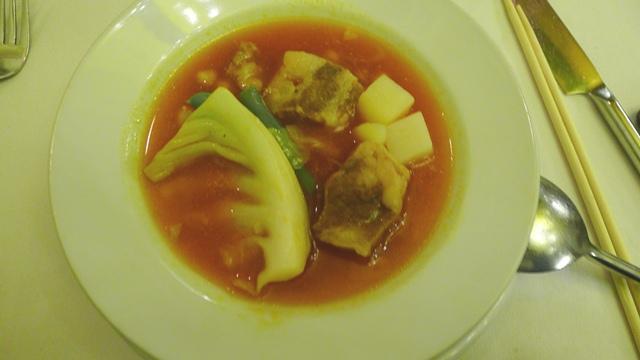 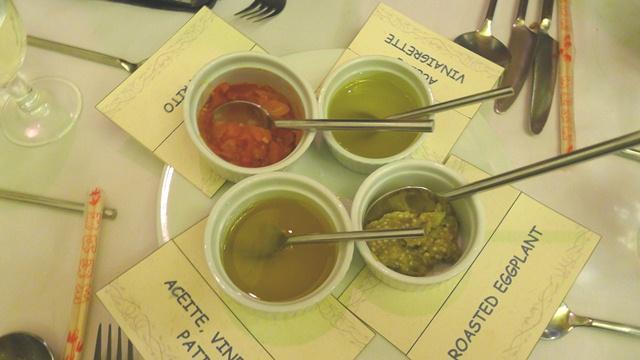 Exhibit 1. The seven courses served to the author at Cafe Ysabel, from top left to right: ceviche and kinilaw na tuna; tom sab pla and sinigang; adobo and adobado; barbeque with kurat sauce; char siu; pochero; the pochero’s four dipping sauces; and a scoop of mantecado ice cream alongside a scoop of butter pecan ice cream. Images were taken from the website of the degustation primer.

Off-hand, you may observe that food throughout the country is served in heaps or lumps and a serving bowl is always filled with as many servings as it can contain. I would therefore like to use my experience from the degustation to introduce a possible unifying factor present in food throughout the archipelago: horror vacui, or literally the fear of empty space. Thus, in the next paragraphs, I would review the dishes from the degustation, locate them in our heterogenous culture, and see how they express horror vacui.

Prominent throughout the whole country, kinilaw has often been both an indispensable appetizer and a viable viand. It is prepared by curing any meat (usually fish) in sugarcane vinegar. It is then mixed with radishes, shallots, ginger, or cucumbers.

Kinilaw quenches a certain palate that thirsts for sourness; this palate is shared by many cultures throughout the country. This sourness is narrower and less rounder than ceviche’s because of the latter’s use of citrus juices instead of sugarcane or coconut vinegar.

Kinilaw also demonstrates horror vacui in its elaborate use of colourful spices that fill its plate. The use of varied spices expands the dish from a simple meal from antiquity to a dish that recalls our role in the Galleon Trade.

Gonzalez’s recipe also featured the additional use of coconut cream that not only complements the sourness of the vinegar, but also adds body to the acid base and fills our palate. This is in contrast with ceviche’s use of corn. As a source of starch, it is supposed to work with the vinegar and is consumed by it. It therefore does not provide total palate coverage.

Adobo and Sinigang have long competed for the title of “national dish.” For many people, Adobo and its endless variations hold that title. The numerous variations inspired a “thousand ways to cook adobo” column in a national broadsheet to weekly publish a new adobo recipe. This featured the varied regional traditions to cook adobo, and seems to unify the culinary traditions of the archipelago.

In this writer’s opinion, sinigang deserves more consideration as the national dish. It provides a survey of Philippine terroir through the regional selection of souring agents – from tamarind, to green mangos, and even dalandan oranges. It also provides an avenue for seafood to be represented as a main component of Filipino cuisine. And like the majority of other dishes, sinigang exemplifies horror vacui in its generous serving of vegetables like kangkong (water spinach), eggplants, radishes, and onions, that fill the bowl.

And like kinilaw, sinigang often uses gabi or taro that adds body to the broth. This fills the space of the bowl and thickens the soup. Notice how sour notes are always light on the palate unlike other tastes. And by adding coconut cream in kinilaw and gabi  in sinigang, we add more weight to this lightness to fill our palates.

Unlike the earlier two dishes that originated from pre-colonial times, this pork belly stew admits our undeniable Spanish heritage. The dish that is internationally referred to as cocido, represents the vital introduction of tomato-based dishes that also carry with them the fear of empty spaces.

The answer to the latter, when it comes to the Filipino kitchen, is sourness, a sourness that is light and narrow.

In fact, what makes pochero pochero and not cocido is our indigenization of the dish by introducing a native vinaigrette with an acid base akin to kinilaw’s.

The vinegar and coconut cream, the sinigang sour broth and taro, and the thick but light vinaigrette of pochero all have something in common: sourness that is narrow when plainly used but expands in body through a thickening agent.

Sourness is, after all, the taste with largest space consumed in our palate as the taste receptors most sensitive to sourness are at the far left and right edges of our tongues. We cannot help therefore but to enjoy sour food in its maximum coverage of the palate.

After the main course, the degustation featured desserts that are not usually prepared. This is to introduce us to new desserts and to appreciate that many desserts throughout the country are predominantly coloured white or brown.

However the experience also showed the importance of milk in our desert production. Milk is irreplaceable in tibok-tibok, mantecado ice cream, yemas, pastillas, and leche flan. This is, however, only half of the story on panghimagas. For desserts like cassava cake, pitchi-pitchi, cuchinta, and other starch-based desserts, minimalism is not an ingredient. Generous garnish of cheese or coconut shavings are prerequisite to complete these.

Horror vacui is present in the first group through low-key expanse of milk thickened by sugar or/and eggs finally smothered with sugar or toasted coconut. While it is present on the latter through our need to smother starch-based desserts with confections of cheese or coconut shavings. And beyond these two types of dessert, the country developed a dessert that exemplified both groups and is therefore an excellent case of horror vacui – the halo-halo.

Literally meaning “mixed”, halo-halo is a cross-cultural product. It combines the tradition of shaved ice and sweetened bean from Japan, with the use of native sweets (gulaman, minatamis na saging [sweetened bananas], nata de coco, and red mung bean paste). These are soaked generously in milk and topped with ice cream and leche flan (custard), and finally garnished with pinipig rice.

The ingredients do not only fill the glass so exuberantly that custom-made glasses are used. And through the plenty ingredients, halo-halo fills our palate that is definitely not sour in note but retains a light feel with body–an essential in the dishes discussed earlier.

Towards a filled bowl of Filipino cuisine and beyond

This author admits that what he has written so far is not a comprehensive survey of Filipino cuisine. It is merely a proposal that many of us can discover Filipino culture through reviewing many popular (or unpopular) dishes. In so doing, we shed light on how food relates to our culture and how culture relates to our food.

Inasmuch as we see a unique sense of feistiness from those in the Bicol region, or a sense of grounding from the Ilocos region, this author finds over-all that the majority of the population indeed has a penchant for sourness inasmuch that we seek lightness in everyday conversations.

We seek lightness in conversation but we abhor its emptiness. We deal with issues lightly in a conversation that goes from many directions and is delivered not in a straightforward manner. Imagine a phone call on a love problem with a radio jock. The conversation is light enough but has a body or fullness in the exchange as we thicken it with quotes, music, or jokes. This is unlike your straightforward conversation with your doctor for a prescription.

And beyond food, we can find horror vacui in our pop music. It favors the birit which covers wide octaves that gives a sense of expanse thickened by medium-bodied vocals. We find it in our paintings and other areas that exploring horror vacui in these many other aspects of culture may demand a new and separate essay altogether.

Perhaps it comes from shared history that is marred with deprivation, of what-could-have-beens, in this country that is persisted with material emptiness. Perhaps we have fought of consoling our psyches by filling up whatever space there is, even our altars and kitchen walls, thickening it with hope that may we not feel the harshness of life in this country that is in need of reforms and of change.

Elroy Rendor doubled his weight in college thanks to the dallop of creme in his daily coffee that aids him in finishing numerous readings. He finished a Bachelor of Arts Major in Development Studies with a Minor in Cultural Heritage and Minor in Filipino Literature from the Ateneo de Manila University. He wants to pilot a Gundam in the near future.